How Big are Your Ears! 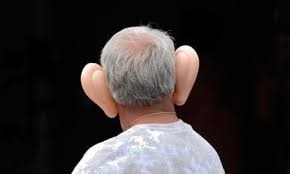 “You shall open-up your hand to him…and provide whatever is lacking to him.” (Devarim 15:8)

There is a short story about a poor wagon driver who was broken-hearted after his young son had tragically died of pneumonia. Because of his extreme poverty, he had no choice but to go back to work immediately after the funeral. He was hired to drive a group of wealthy businessmen to another city. In the middle of the trip, the wagon driver started mumbling about his son. “He was such a good boy… it was only a cough….” The passengers were annoyed by the sounds of the wagon driver’s moans and groans. They shouted at him to stop bothering them. The wagon driver became silent. A few hours later, he started moaning and groaning again. As before, the passengers screamed at him to stop bothering them. This happened a few times, until they reached an inn. The passengers went inside to get something to eat and drink. The wagon driver remained outside to feed his horse. As he was feeding his horse, he repeated the story about his son’s death. The horse nodded its head from time to time. It seemed to the wagon driver that the horse was listening to him. He finally had found a sympathetic ear to listen to his sad story. (Rav Pam on Chumash by Rabbi Sholom Smith)

A number-of-years ago, a man walking the streets of New York City was stopped by a man holding a gun. At gunpoint, the stranger told the sad story of what he was going through. With great emotion, he poured-out his many problems. After an hour, he was finished speaking and put away his gun. He apologized to his victim for frightening him. He explained that he had been trying for weeks to find a sympathetic ear to listen to his problems. He was unable to find anyone, so he had to try desperate means. (Love Your Neighbor by Rabbi Zelig Pliskin, as heard from Rabbi Chayim Zaitchik)

When the Torah discusses the topics of giving tzedakah and doing chesed it says, “You shall open up your hand…and provide whatever is lacking to him.” (Devarim 15:8) The words, “to him” seem to be extra. In actuality, those words teach us the importance of dealing with every needy person as a unique individual. There is no concept of “one size fits all” when it comes to giving tzedakah or doing acts of chesed. The Ba’al Haturim, quoting the Sifri, says that if the poor man is used to eating bread, give him bread. If he is used to eating delicacies, give him delicacies. Rashi says that you should even give him a horse to ride on and a servant to run in front of him, if that is what he was used to.

Even if you are unable to give the poor man the money that he needs, you can still fulfill the mitzvah of doing chesed to him. Rav Pam zt”l says that doing an act of chesed does not necessarily require much money, time, or effort. It can be as simple a chesed as listening to someone unburden his problems. Every human being needs someone to listen to him. When you do so, that shows that you care.

A tzedakah collector once remarked that the best donation that he received each year came from a man who lived on the Lower East Side of Manhattan. After a few questions, the listener realized that the collector was speaking about the Gadol Hador, Rav Moshe Feinstein zt”l. Although Rav Moshe’s donation was not a substantial one, he made the tzedakah collector feel valued. He took the tzedakah collector’s hands in his own, gave him brachos and listened to him unburden himself of his problems. The Talmud (Bava Basra 9B) says whoever consoles a poor person with words of comfort and encouragement receives eleven blessings, almost double the blessings received for giving him money.

The Chofetz Chaim zt”l  (in Chovas HaShmirah, as quoted by Rabbi Pliskin) says that we have a moral obligation to boost the spirits of someone who is dejected, by speaking with him at length. A student once saw Rabbi Yisroel Salanter zt”l standing on a street corner, talking and joking with a stranger. The student was surprised since Rabbi Salanter zt”l usually had a very serious demeaner. He questioned his rebbe’s actions. Rabbi Salanter zt”l explained that the stranger had problems that were weighing very heavily on him, and he wanted to alleviate his depression (Ohr Yisroel, as quoted by Rabbi Pliskin).

We all have challenges in life. We all need someone to listen to us, at times.

We all need a sympathetic ear to hear us as we unburden ourselves.

Even if we have no solutions to others’ problems,

simply listening to them can help make a difference in their lives.