Look in the Mirror and See Your Greatness! 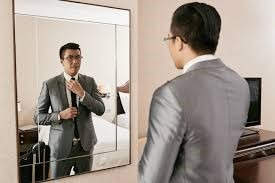 “Yaakov rose from Be’er Sheva. The sons of Yisroel transported their father Yaakov, their children, their wives in the wagons that Pharaoh had sent to carry him.” (Bereishis 46:5)

While he was in Dachau, a Jew who was being taken to his death suddenly flung a small bag at Judah Wallis. Judah caught it, thinking it might contain a piece of bread. Upon opening it, however, he saw that it was a pair of tefillin. Judah was very frightened because he knew that if he was caught carrying tefillin, he would be put to death instantly. He hid the tefillin under his shirt and headed for his bunkhouse. In the morning, just before the roll call, he put on the tefillin. Unexpectedly, a German officer appeared. He ordered him to remove the tefillin and noted the number on Judah’s arm. At the roll call, in front of thousands of silent Jews, the officer called out Judah’s number. He had no choice but to step forward. The German officer waved the tefillin in the air and said, “Dog! I sentence you to death by public hanging for wearing these.” Judah was placed on a stool and a noose was placed around his neck. Before he was hanged, the officer said in a mocking tone, “Dog, what is your last wish?” “To wear my tefillin one last time,” Judah replied. The officer was dumbfounded. He handed Judah the tefillin and Judah put them on. Judah had a noose around his neck and was wearing tefillin on his head and arm. The entire camp was watching this scene, awaiting the impending hanging. As Judah turned to watch the silent crowd, he saw tears in many people’s eyes. Even at that moment, as he was about to be hanged, he was shocked. Jews were crying! How was it possible that they still had tears left to shed? And for a stranger? Where were those tears coming from? Impulsively, in Yiddish, he called out, “Yidden, I am the victor. Don’t you understand, I am the winner!” The German officer understood the Yiddish and was infuriated. He said to Judah, “You dog, you think you are the winner? Hanging is too good for you. You are going to get another kind of death.” “Judah was taken from the stool and the noose was removed from his neck. He was forced into a squatting position and two huge rocks were placed under his arms. Then he was told that he would be receiving 25 lashes to his head – the head on which he had dared to position his tefillin. The officer told him that if he dropped even one of the rocks, he would be shot immediately. In fact, because this was such an extremely painful form of death, the officer advised him, “Drop the rocks now. You will never survive the 25 lashes to the head. Nobody ever does.” Judah’s response was, “No, I won’t give you the pleasure.” At the 25th lash, Judah lost consciousness and was left for dead. He was about to be dragged to a pile of corpses, after which he would have been burned in a ditch, when another Jew saw him, shoved him to the side, and covered his head with a rag so that people didn’t realize he was still alive. Eventually, after he recovered consciousness fully, he crawled to the nearest bunkhouse that was on raised piles and hid under it until he was strong enough to come out under his own power. Two months later he was liberated. (from Aish.com)

After the destruction of the Bais HaMikdash, our enemies rummaged through the ruins. They slaughtered and ate the sheep that had been waiting to be used for the korban Tamid (sacrificial offering). They found and ate the loaves of the Show-Bread that were on the Shulchan, the holy Golden Table. In reference to these enemies, it says in Tehillim (14:4), “Have all the workers of iniquity no knowledge? Who eat up my people as they eat bread and call not upon Hashem.” The Midrash Shochar Tov (on Tehillim 14:4) quotes Rabbi Shmuel who explains the pasuk as a criticism against our enemies. Interestingly, this criticism was neither for destroying the Bais HaMikdash nor for the subsequent evils that they did. Rather, they were taken to task for the way that they treated such a great people, the Jewish People, Hashem’s chosen Nation.  As Yirmiyahu the prophet stated, (Yirmiyahu 2:3) “Israel is holy to Hashem, the first fruits of his increase.” Rashi explains that Yirmiyahu is comparing the first of the harvest before the Omer to the Jewish People. Those fruits are forbidden to eat. Whoever eats them is liable. Similarly, the Jews are like Hashem’s first fruits. Whoever harms the Jews will be liable. Our enemies should have realized that they were dealing with Hashem’s Chosen People.

This seems to be a very unusual criticism that is being leveled against our enemies. They were the lowest of the low. They were steeped in murder, idol worship, and immorality. They desecrated the place where Hashem’s Holy presence resided. We would not expect such evil people to be able to see the beauty and greatness of the Jewish People. Especially at their greatest moment of evil, as they were destroying and sinning. Furthermore, at this time, the Jewish People had just been stripped of the greatest glory. Their symbol of greatness, the Temple, had just been destroyed. It was in ruins and the Jews were being sent into exile in chains. What greatness was there to see?

Yet, the Midrash is teaching us, even at our lowest point, even evil people, are capable of seeing the greatness of the Jewish People! Even then, we are great and are Hashem’s chosen. We should never forget that!

Our forefather Yaakov was about to go to Egypt with his entire family. The pasuk (Bereishis 46:5) states, “And Yaakov rose from Be’er Sheva. The sons of Yisrael transported their father, Yaakov, their children, their wives in the wagons that Pharaoh had sent to carry him”. This pasuk is unique. It uses both names, Yaakov and Yisroel. Why? The Sforno explains that the Jewish People were on the way to Egypt where they would eventually be enslaved. At that time, they prepared their mental state of being. They went with the attitude that although they were going to start their exile and enslavement, they are the Chosen Nation of Hashem, the nation that will rule over others. That was symbolized by the name, Yisroel. Normally, one who realizes he is about to go into exile and be enslaved, becomes demoralized. That was not the case for the Jewish People.

Even a poor Jew, lying on the ground and being stomped upon by the boots of a non-Jew, can look at his captor with the attitude that he, the Jew, is actually the master. This is the strength of a Jew. A Jew can maintain such an attitude of strength, even under the worst circumstances. (based on a dvar Torah by Rabbi Alter Henach Leibowitz zt”l)

We are the Chosen Nation of Hashem. Even our evil oppressors can, and are obligated, to see our greatness. Certainly, we, ourselves, should always feel our greatness, as part of Hashem’s Chosen People, and act befittingly.