Please Don’t Hand Me Those Animals! 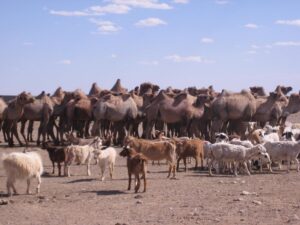 “…And he [Yaakov] prepared from whatever came into his hand for a gift for his brother Esav” (Bereishis 32:14)

Many years ago, Dr. Nachman Kook practiced medicine in Yerushalayim. Since he did not have a receptionist, his patients would sit down and wait to be called. When the doctor asked who was next, that person would stand up and go into the examination room. Rabbi Yechezkel Sarna, Rosh Yeshiva of the Chevron yeshiva, was the one exception to the rule. Rabbi Sarna’s medical condition required him to regularly see Dr. Kook. With great respect for this Torah luminary, whenever Rabbi Sarna came, Dr. Kook called him to be seen next. Once, Rabbi Sarna was sitting in the waiting room when Dr. Kook came out. Expecting to be next, as usual, Rabbi Sarna got up from his seat and headed to the examination room. Dr. Kook apologized to Rabbi Sarna and said that he had to first see a lady who had already been waiting. When Dr. Kook finished examining the elderly lady, he called in Rabbi Sarna. Dr. Kook explained to Rabbi Sarna why he did not call him in right away, as he was accustomed to do. He explained that the elderly lady was poor, and he did not charge her for her examination. Dr. Kook was concerned that if he took Rabbi Sarna ahead of her, she may have thought that priority treatment was being given to those patients who paid. She may have felt badly that as a non-paying patient, she wasn’t getting the same attention as the paying patients. That’s why the doctor took her right away. (In the footsteps of the Maggid by Rabbi Paysach Krohn)  Dr. Kook thought the situation through and showed such sensitivity to the elderly lady.

After being away for many years, our forefather Yaakov was finally returning home to the land of Israel. Yaakov sent messengers to Esav to find out if Esav still harbored a murderous hatred towards him for receiving Yitzchak’s blessings. The messengers returned to Yaakov saying that Esav was coming to “greet” Yaakov, together with 400 men. The Kli Yakar says that Esav was coming with an army to fight Yaakov. Yaakov realized that he was in a dangerous situation. Rashi says that Yaakov prepared for the upcoming encounter in 3 ways. He prepared for a possible battle, he prayed to Hashem, and he prepared a gift to appease Esav.

If Esav would be appeased by Yaakov’s gift, then war would be averted. Obviously, the type of gift was of utmost importance. Yaakov sent Esav a very generous gift of over 500 animals! Yaakov told his servants to space the animals in such a way, as to magnify the appearance of the many animals that he was sending.

Since the purpose of this magnificent gift was to appease Esav, we would think that Yaakov would have chosen the best and finest quality animals. Yet, surprisingly, that was not the case. The Torah tells us (Bereishis 32:14) that Yaakov took whichever animals came into his hand. That means that among the animals, Yaakov may have sent animals that were sickly or blemished. How could Yaakov do such a thing?

The Chofetz Chaim zt”l (in sefer Chofetz Chaim on the Torah) explains that Yaakov did not feel it was proper for him to actively choose which specific animals to send to Esav. Those animals that had belonged to Yaakov would now be going to the rasha, Esav. Yaakov did not want to be directly involved in choosing the animals since that would have caused some measure of suffering to them.

Yaakov had learned about this sensitivity from an event that had occured to himself many years earlier. When he left home to travel to the house of Besuel and Lavan, Yaakov stopped in Bethel. He prepared to spend the night outside, in the open. Rashi (Bereishis 28:11) says that Yaakov took 12 stones to encircle his head like a cape, to protect himself from wild animals. The stones “quarreled” with one another, vying for the privilege of being the stone that the tzadik, Yaakov rested his head upon. Immediately, Hashem fused the 12 stones into 1 large stone so that Yaakov was resting his head on all the stones, which were now 1 stone. From this, Yaakov understood that even an inanimate object, such as a stone, had the urge to draw close to holiness. If that was the case then certainly, animals, who are living creatures, feel the need to be attached to holiness and not to wickedness. Therefore, Yaakov understood that the animals which would be sent to Esav, would undergo a measure of suffering.

Yaakov had to send the animals. However, he limited his hands-on involvement by not actively choosing which animals to send. Yaakov’s gift had potential life-saving repercussions and it seemed important to send only the finest animals to Esav. However, Yaakov’s sensitivity determined that he had to take that chance. It would not have been appropriate otherwise.

This is such a meaningful lesson for us. We must be so sensitive to the feelings of others

so as not to cause them to suffer. We must be so careful even if that means

that an action which we want to do will not be as effective.